Don’t Insulate the Diaphragm of a Pressure Regulator

Don’t Insulate the Diaphragm of a Pressure Regulator 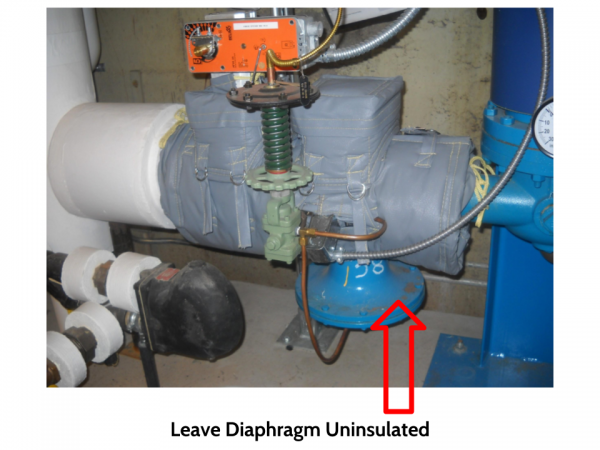 About PRVs in Steam Systems

A pressure regulator is a type of valve whose primary mission is to adjust the pressure of a medium (like steam) to meet the need of particular application, regardless of fluctuations in pressure of the substance that flows in the valve.

In a steam-using plant, steam is often generated at high pressures and reduced locally to provide heat for each steam user. The typical component used to accomplish this is a pressure reducing valve (PRV), which is, to be specific, a type of pressure regulator — though these terms are often used interchangeably. To maintain the proper outgoing system pressure, the PRV must be able to respond to changes in pressure of incoming flow: if load pressure increases by 50 psi, the valve must reduce the pressure by an additional 50 psi.

The Role of the Diaphragm in PRVs

Why You Don’t Insulate the Diaphragm Chamber of the PRV

What is Flash Steam?

We’re glad you asked. When water has more energy than can exist as liquid at a given temperature, the water “flashes off” as a burst of steam. This can be particularly dangerous because steam occupies much more space than water. Water at 15 psig (pounds/square inch) has a specific volume of 0.017004 Cubic feet/lb.; steam at 15 psig has a specific volume of 13.75 Cubic feet/lb. The steam occupies 808.63 times the space as the water.

When the liquid flashes to steam it is like a mini explosion — the steam expands in a small, liquid filled space causing the diaphragm to flex, if the diaphragm cannot flex enough to accommodate the flash steams' requirement for “space”, it will rupture.

PRV insulation can help save your facility a good bit of money; making sure you do not insulate the diaphragm will save you a lot of trouble.