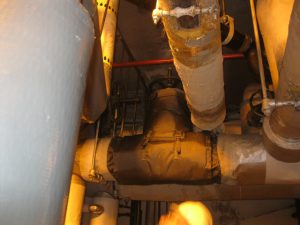 The Project -- Thermaxx entered into contract November, 2011 with Abatement Industries Group to provide removable insulation jackets and removable insulation overs in the powerhouse at Sikorsky Aircraft in Stratford, CT. Thermaxx completed an energy survey and worked with the maintenance department to prepare a scope of work that included replacing missing pipe insulation and installing removable jackets on the components such as steam traps, gate valves, wye strainers, and pressure reducing valves (PRVs). Insulation thickness was designed based on the desired touch (outside insulation) temperature. Insulation thickness varied on the larger and hotter pipes.

Annual savings are estimated to be $23,500. The estimated length of time for cumulative savings to exceed initial cost is a mere 5.27 months. 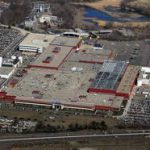 About Jackets -- Standard insulation, installed during construction, is often removed and not replaced on piping components (pressure reducing valves, gate valves, steam traps, unions, etc…) that require routine maintenance. Removable insulation jackets are designed to insulate those components and allow maintenance personnel to quickly remove and replace the insulation to facilitate general maintenance. In addition to keeping the work place safe, insulation jackets also keep the heat where it belongs: in the pipe!