The Physics Behind Chamber Muffler Designs

The Physics Behind Chamber Muffler Designs

This article was written by Michael Bannon

There are two types of sound wave interferences: constructive and destructive. Constructive interference is two waves having the same frequency and being in-phase. In-phase means that the crests of each wave are in alignment (see the first diagram below). When this happens amplitudes are added together creating a more powerful wave.

An example of this would be at a rock concert. Imagine you are at a Bob Seger concert, sitting 25 rows back on the right side of the stage. In front of you are two giant speakers. One speaker is situated on top of another speaker. Both speakers are sending out identical sound waves. This is an example of constructive interference. The waves are considered in-phase: the crests of each wave line up with one another. Here the amplitudes are added together in essence doubling the power of the wave.

If one speaker was set back a bit, approximately ½ a wave length, then the crest of one speaker’s wave will line up with the trough of the other speaker’s wave and vice versa. These waves are said to be out-of-phase. The two amplitudes will cancel each other out and there will be no sound. This is destructive interference. This concept is used in most car mufflers to cancel the exhaust sound waves. 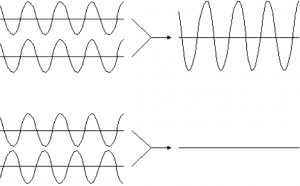 The top diagram shows two waves in-phase traveling in the same direction. The two wave crests and troughs are aligned. The two crests add together to form a supercrest and the two aligned troughs form a supertrough. The two waves in the second diagram are out-of-phase. The crest of one wave matches the trough of the other wave and vice versa. The amplitudes here cancel each other out - the sound in this case disappears. Muffler designers use this concept when designing chambered mufflers.

Waves Traveling in Opposite Directions

Below is a diagram showing two waves moving towards each other. Here the sound gets louder for moment at their meeting point as the amplitude doubles. After they pass through each other and continue onward it is like nothing ever happened.

Exhaust sound waves enter into the muffler and begin to reflect off a metal walls causing the sound waves to invert (turn upside down). These upside down waves travel back and intersect with new waves entering the muffler. The inverted wave crests meet with the incoming wave troughs thus canceling each other out. This happens continuously until the car is turned off. This design generally attacks the higher frequencies. The lower frequencies with longer wavelengths are less affected. That is why chambered mufflers have a low frequency sounds — these sounds tend to be less annoying than the higher frequency sounds.

An example of a chambered muffler design is this Flowmaster muffler: 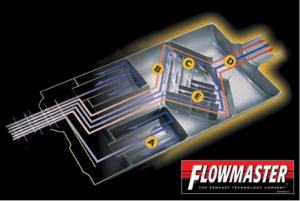 Here we can see that in area A the sound wave reflects off the chamber wall and inverts in an attempt to cancel with the incoming sound waves. In areas B, C, and E the wave is divided and reflected, and when they come together at D the waves are ideally canceled. The word “ideally” is used because under actual conditions, there are different and varying frequencies of sound coming through the muffler and only some will be canceled.

Automotive muffler designers use some very simple sound physics concepts to reduce the amount of noise emanating from your vehicle. Engine noise is comprised of many frequencies and these frequencies vary as the speed of the engine varies. Because of the many and varying frequencies, muffler designers cannot eliminate all of these sounds, but attempt to eliminate the higher frequency sounds, which are more noticeable to the human ear.