The Project—In January, 2012, Thermaxx entered into contract with West Virginia University (WVU) to provide removable insulation jackets and removable insulation covers in a mechanical room at their Mineral Resource Building. WVU contacted Thermaxx Jackets after discovering the company via an Internet search for information on insulating steam traps. After a site visit by the Thermaxx Representative, it was realized by both the University and Thermaxx that more than steam trap insulation was needed. The Mineral Resource Building mechanical room yielded up many needs for insulation jackets including: gate valves, steam traps, Wye Strainers, pressure reducing valves, and pumps.

The selection was made for all of these applications. Upon delivery, the Thermaxx Representative demonstrated how to install the different types of jackets supplied. The estimated length of time before positive return on investment (ROI) is realized is only 12 months. Pictured below is a “Before” and “After” of a pump station. 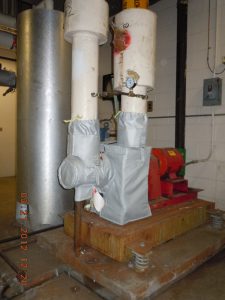 The University has planned to undertake a study on approximately 900 steam traps, and Thermaxx Jackets will be on hand to deliver once again. WVU is extremely forward thinking when it comes to energy savings and has seen the value in conserving energy on a “Thermaxx” scale. 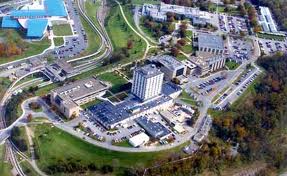 About WVU—Located in Morgantown ,WV, West Virginia University is located on 900 acres and has an enrollment of 30,000 students. Sustainability is a top priority for WVU. They have committed to decreasing the amount of energy used on campus through strong conservation efforts and an energy performance contract with Siemens Building Solutions. In addition, WVU reduces energy usage through the usage of “Green Steam” for heating and cooling. The steam is taken from a steam extraction point from the Morgantown Energy Associates (MEA) power plant, a co-generation facility located near campus. WVU also lowers energy usage through the purchase of a wide variety of Energy Star products and has installed energy-saving technologies in many buildings. These endeavors have resulted in significant drops in energy usage and substantial savings for WVU.

About Jackets—Standard insulation, installed during construction, is often removed and not replaced on piping components (pressure reducing valves, gate valves, steam traps, unions, etc…) that require routine maintenance. Removable insulation jackets are designed to insulate those components and allow maintenance personnel to quickly remove and replace the insulation to facilitate general maintenance. In addition to keeping the work place safe, insulation jackets also keep the heat where it belongs—in the pipe!