About the Calabro Cheese Corporation 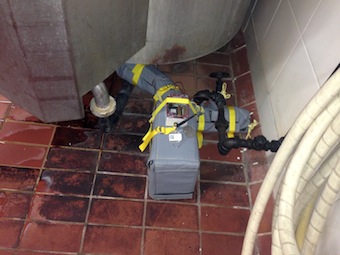 Because they are an energy conscious company and wanted to cut costs around their facility, energy upgrades that would have cost saving benefits were identified. Through Energize Connecticut programs Calabro Cheese completed four energy efficiency upgrade projects in 2012 & 2013, one of which included insulating the facility’s steam components.

Calabro Cheese contracted Thermaxx in 2013 to insulate 49 steam components in their facility. Many of the pieces were fitted with Smart Jackets, which feature a built-in wireless temperature monitoring system. This allowed Calabro to wirelessly monitor their critical steam traps that serviced the processing equipment in the plant and keep precise records of their energy savings.

Thermaxx Smart Jackets also enable the facility manager to check on the status of steam traps through an online portal and receive alerts from real time-data. This was particularly helpful because the majority of the steam traps in the facility are 10-20 feet from the ground, making them hard to access and maintain without the necessary equipment. Steam trap maintenance and wireless monitoring is made much easier with Thermaxx Smart Jackets.

49 steam components were insulated throughout the project, of which over 20 were fitted with Smart Jackets. The components insulated with jackets included:

In the first few weeks of wirelessly monitoring Calabro’s steam traps with Thermaxx’s Smart Jackets, a problem in one of the critical steam traps was noticed. Our team of engineers worked closely with Calabro to determine the problem and remedy it quickly, preventing any major damages or problems. This is a true testament to the affect Smart Jackets have on enhancing steam trap maintenance.

The areas in which the Smart Jackets were installed were high-traffic areas, meaning that the area was made more comfortable & safer for employees by the insulation jackets. These benefits were attained in addition to incredible incentives and savings, which pay for the cost of the project themselves. Below are the final costs and return on investment. These savings have been confirmed by the natural gas provider of the Calabro Cheese Corporation. As the table shows, the project paid for itself in 20.79 months. With the aid of state incentives, the project paid for itself in just 12.47 months.

For more information on how you can begin saving time, money, and energy in your facility with Thermaxx Smart Jackets, contact us.